Angel of God, my guardian dear,
To whom God’s love commits me here,
Ever this night, be at my side,
To light and guard, Rule and guide. Amen.

Excitement permeated the little village. It was December, 1961; the night of the annual Christmas concert. The nuns of the Congrégation de Notre Dame and students had been preparing for weeks; skits, solos, instrumentals, choir pieces, the pageant and snacks for the “tea” afterwards; coffee was never served. The children, dressed in whatever “finery” a parent could manage, glowed with anticipation. The instruments were tuned and lines were memorized. An impressive evening passed rapidly and it was time to head home. We students would take the bus which “put on an extra run” for this evening to ensure that all children had a way to attend.

Murdock had it all warmed up and ready to go; his calloused hand on the knob of the clutch; the familiar roll ’em cigarette stub between his yellow fingers. A man well known for the little bottle tucked into his jacket pocket, he may have sipped more than a “wee dram” that night!

Nevertheless, off we went over the frozen dirt roads. The lake was beginning to freeze over but Lady Moon, radiating her beams on the ebony waters lit up the night sky with her glimmering glow.

We bounced along, stopping off here and there; Roddie Frank’s, Big Hector’s, the Lighthouse, Mickey Ben’s and finally up the hill to drop off the last 4 families.  Suddenly, the bus lurched and we were trapped in a snowbank. Murdock did his best; rocking the bus back and forth, but it was futile.

He turned to us all and said in a loud voice, “You two!”, pointing at my 6-year-old brother and myself. 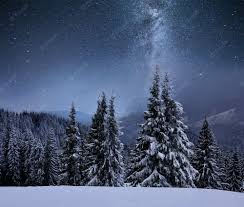 “Us?” I thought, I’m only 7 what could he possibly want with us?
“Get out and walk up the road to your farm. Your dad has a tractor. He will need to pull us out.”
“Us?” I thought again. It’s dark and cold. It’s probably 10 miles (it was one!)
But no one ever disobeyed Murdock so out we went … and up the road.

The starry moon-filled night provided light to see, but could not eradicate the fear from our young hearts. I took my brother’s hand.
“Let’s say the rosary and pray to our guardian angels. They will protect us.”
Was it our guardian angels or the strength we found in holding hands? They brought comfort and courage. We were sheltered from the “terrors of the night.”

I can only imagine the fear in my poor father as we woke him that night. He had left the concert early as he had an important date with 20 cows at 6 am.
Off he went with the tractor and pulled the bus out.