The Continuing Incarnation of Jesus Christ 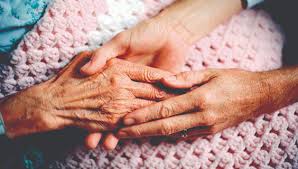 The Continuing Incarnation of Jesus Christ
We went on a trip to visit family that began at the tomb and shrine of a Redemptorist martyr and ended at the tomb of my mother as she was laid to rest. I did not know that my mother was going to pass away. But I am grateful that I was able to be there.
I have never met so many Christs in my life on this pilgrimage to my holy land. I met him in the nurses and workers and volunteers at the Villa. I met him in my nieces and nephews, in my brother and my sister. And most especially in my mother. He was everywhere I went.
We had been there almost 2 weeks when we made the decision to come back to Grande Prairie as my mother was weak and frail but we didn’t really know how long she would be with us. So we said our goodbyes and the next day we were on our way back. Well 2 hours west of Winnipeg my brother called and said that we had better come back as mom had taken a turn. So we went back.
For the times we visited before we had only been allowed to have window visits. Then the day after we got back I was outside my mother’s window as usual at the Villa and the head nurse suddenly came out to me and said that I could go in to see my mother. So I was able to spend my mother’s last days with her.
Two days before we had asked permission to see if I could go in to be with her. We were told absolutely not after all with the pandemic we could not make any exceptions. Yet the next day I was allowed to go in.
There were many people that told me that they had been praying for me to be able to do that. Prayers were answered.
Once I was in there I realized how Christ-like the care was that my mother received not only for her physical needs but also for her spiritual needs: The nurse that came out of retirement to work a shift on my mother’s wing so she could pray with her;Sister Irene Rioux a daughter of Marguarite d’Youville that worked tirelessly to bring Jesus to the residents – Sometimes very much unappreciated and even rejected by some, as Christ was. But Sister Irene had developed a close relationship with my parents as she was also there when my father passed away last year.
Although I had never met her before she was a part of the family.
Then after mom passed on Monday evening we wondered if we would have enough time to arrange for a funeral. My mother wanted a mass and my brother and my sister did not think that we would have enough time. I called the parish where my mother wanted to have the funeral and no one was available due to vacations. Not for a few weeks anyway.
So I called the church next to the Villa – St. Anne’s parish. I spoke to Father Kevin and asked him if we could have a funeral on short notice. He said yes and we met on Wednesday before the funeral to make the arrangements.
Father Kevin was from Cameroon and had only been in Canada for 2 months and had been a priest for 2 years. He was bilingual as my mother wanted the mass in French. He was a member of the Missionnaries of the Sacred Hearts of Jesus and Mary. My mother always had a very strong devotion to the Sacred Heart of Jesus.
The mass was one of the most beautiful liturgies I have ever attended. It would have been exactly as my mother would have wanted it. Also whenever a family member got up to do a reading or prayers of the faithful or when I did the eulogy, we heard a train whistle every time one of us spoke. My father who had passed away had been a railway worker and I suppose that this was his way of being present with us.
There were so many moments of grace on this journey. Many more moments too many to mention here. Grace abundantly poured out, lavishly and generously overflowing. This was a consolation amidst a world of desolation; grace that overcomes all the darkness in our lives despite our weakness. If only we would let Jesus in.
I wonder if we will ever truly know just how much God loves us. How so many people, so many Christs seen and unseen came together to celebrate the life of one single soul. My mother was faithful to her God and He was certainly faithful to her.
I realized that these events and how they unfolded were just as much for us the living as they were for my mother.
If I had not made the decision to go back I know that I would have regretted it for the rest of my life.
Jesus continues to walk with us, to live with us, to suffer with us and to die with us. And also to rise with us.
The Incarnation is ever continuing and ever present. It enables us to strive to sacrifice everything for the good, the true and the beautiful.

O Israel hope in the Lord
For with the Lord there is mercy
And with him is plentiful redemption
Psalm 130:7