We live in Each Other’s Shelter

We Live in Each Other’s Shelter

Inhabitants of rural areas tend to keep an eye out for each other. One Sunday after my father turned 95, something extraordinary happened. He missed Mass!  The village was a flurry of questions, “Where is Roddie? Is Roddie well? He was at the Father’s Day Supper last week and he looked fine.”

Living in the shelter of each other is a quietly understood fact of life. There would be no greater example of this fact and the power of prayer than the story of Mrs. Hector and Morag.

Hector MacKinnon, his wife and daughter, Morag, lived on a remote, isolated farm in Benacadie. Morag had Down’s Syndrome but was a much-needed companion for her parents. This role because even more important after Hector died.

One November day, Mrs. Hector was doing some chores around the barn. A gust of wind caught the barn door. It swung suddenly, knocking her to the ground. She was unable to get up. Her hip was broken.

Eventually, Morag came to the barn to check on her. She was able to get her mother into the barn, where there would be some shelter. Morag made a trip to the house and brought blankets to cover her.

Now this was in the days before the coming of the ubiquitous cell phone. At this time in this area, the early 1960s, very few homes even had a land line. Morag could not go for help.

Mrs. Hector started to pray in full earnestness. It seemed now that prayer would be her only hope. Like incense rising to the ears of the Lord, her voice was heard on high.

At his farm a few miles away, in Castle Bay, Jim Bryden was just finishing up his evening chores. He had an uneasy feeling. He suddenly felt that he should go and visit the MacKinnons. Jim paid heed to this call.

Arriving at the MacKinnon home, he was immediately concerned with Mrs. Hector’s absence. Morag was able to direct him to the barn. It was in darkness, but a murmuring sound alerted him to Mrs. Hector. After checking her condition, he knew he would have to go for help. The wait must have seemed like an eternity to Mrs. Hector, but Jim returned as quickly as possible. Soon additional help was on the scene.

Pope Francis has re-iterated this idea of caring for each other and the earth in the Encyclical Laudato Si. “Because all creatures are connected, each must be cherished with love and respect; for all of us, as living creatures, are dependent on one another” (L.S. 42)

Who shelters you? Who lives in your shelter? Be thankful every day for this treasure. It is one of God’s many gifts. 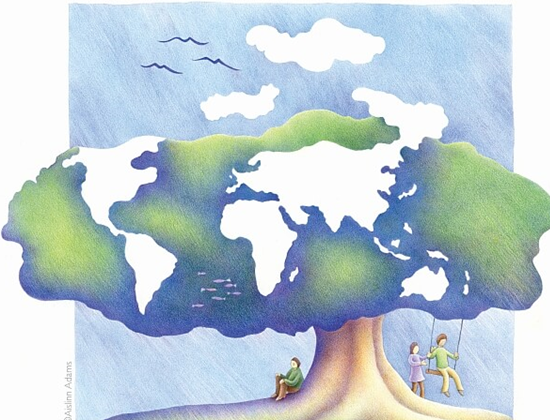