A few years ago, I had the privilege of visiting Canada’s second martyr’s shrine. The Bishop Vasyl Velychkovsky National Martyr’s Shrine located in Winnipeg, Manitoba. In the twentieth century millions of people gave up their lives for Christ.  In honor of this sacrifice Pope John Paul II beatified several martyrs for the Ukrainian Catholic Church on June 27, 2001.  Among the martyrs was the Redemptorist Bishop, Vasyl Velychkovsky.

We have an image of him located in the Modern Martyrs room in our church.  For many years of his life during World War I, World War II and under the Soviet regime he was frequently arrested, tortured and imprisoned.  Despite this, Bishop Vasyl was a zealous missionary disciple always eager to proclaim the Gospel.  He preached many missions sometimes lasting up to 10 days.  It seems that the more he was persecuted the more he proclaimed the Gospel to the people of Ukraine.

When the Soviets made the Ukrainian Catholic Church illegal the church went underground and the Redemptorist priest Vasyl Valechkovsky was secretly ordained a Bishop by the Metropolitan in Moscow.

In January of 1969 he was arrested again and charged with writing a book about our Mother of Perpetual Help, for listening to Vatican radio and for baptizing people.  They tried to extract information from him about the underground church but were not successful.

Finally, near death he was released and exiled from the Ukraine and was invited to come to Winnipeg in June 1972.  Overcome by the torture and mistreatment he died on June 30, 1973 and was buried at All Saints Cemetery in Winnipeg. 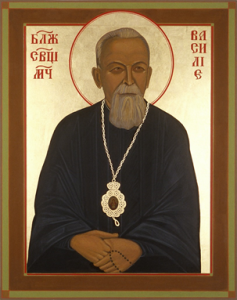 After Blessed Vasyl was beatified by Pope John Paul II his body was exhumed on September 16, 2002, 29 years after his death. Following Vatican protocol his body was examined by doctors and church personnel.  His body was found to be fully intact with all its muscle mass.  On September 2, 2002, his holy relics were enshrined at St. Joseph’s Ukrainian Catholic Church in Winnipeg.  It is a place of pilgrimage for many people.  He is also the Patron of Prison Ministry for the Ukrainian Catholic Church.

Today with the Ukraine at war again many of the priests and religious, including the Redemptorists, are choosing to remain in the Ukraine to minister and to help the people.  I am sure that with them many more witnesses are testifying with their lives as God always raises up saints especially in times of intense suffering and persecution.  Many families have come to Canada to seek temporary refuge during this time of uncertainty.  Blessed Vasyl’s example has been imitated by many of the people remaining in the Ukraine.

Let us pray for the most powerful intercession of Blessed Vasyl along with all the Ukrainian martyrs for a quick end to the conflict and that peace and justice will prevail.

Blessed Vasyl Velychkovsky … pray for us

Our Mother of Perpetual Help… pray for us